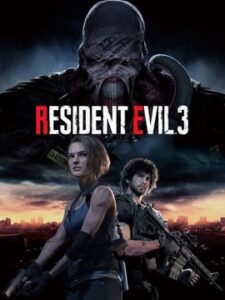 That feeling you have when the other reviewers were right.

It was probably obvious in my review of the Resident Evil 2 Remake that I’ve always loved the Resident Evil series. While 4 is my favorite, 2 (or the remake in this case) is my second favorite. That leaves 3, which has always sort of been in a precarious position. Resident Evil 3: Nemesis came out in September 1999 as I was finishing junior high. Everyone was pumped for it and couldn’t wait to see how Jill Valentine fared against the new big bad biomutant on the block known as Nemesis. Nostalgia is a helluva mental state as I certainly remember where I was when I picked up the game. Others no doubt felt the same when they learned that this game was already in development (and almost completed) shortly after the release of the next-gen Resident Evil 2. Many fans enjoyed the original, but they were disappointed that it didn’t meet their expectations. Ironically, critics expressed this exact sentiment when the original game was released more than twenty years ago. Even though it was fun to play as Jill Valentine as she escapes Raccoon City, the third installment really didn’t do much to differentiate itself from its predecessor. It included some interesting additions, including a gunpowder-mixing component that allowed Jill to craft ammunition, and a mini-game called “Mercenaries” starring mercenaries in the original game as they race against the clock to save survivors. The remake retains the first feature, but removes the second, essentially replacing it with a “Shop” feature that can be accessed after beating the game, and a separate game called Resistance that I will discuss later. Ultimately, although fan demand ushered in a remake of Resident Evil 3, it still once again somehow pales in comparison to the sequel.

Whether the original or the remake, Resident Evil 3 has always been a chronological oddity in the RE timeline. The game begins on September 28th, which is roughly a day before the events of Resident Evil 2. This means that Resident Evil 3 is initially a prequel. Halfway through the game, Jill winds up in the hospital and doesn't wake up until October 1st. The events in Resident Evil 2 wrap up before she awakens, so the second half of the third game is a pseudo-sequel. As it stands, even the story heavily relies on Resident Evil 2, which explains their similarities. The original Resident Evil 3 was sort of off my radar for several years because I don’t own a physical copy for the PlayStation. That means I played it, got a few nifty upgrades thanks to the “Mercenaries” campaign, and basically walked away from the game. This changed in 2013 when I picked up a Vita and (finally) a PlayStation 3. Resident Evil 3 was one of the first games I downloaded to both consoles. I played it, beat it, and once again shelved it. Still, once I heard the news that a remake was in development, I was stoked. If Mr. X scared the bejesus out of gamers, what did Nemesis have in store for us?! It turns out an unusual combination of entertainment and annoyance.

First things first. I did enjoy a lot about the game and I even thought it was better than its predecessor on certain occasions. First, I loved the updated versions of Jill and Carlos. Both felt more fleshed out and watching their arcs made for an entertaining journey. In the original game, Jill returns to the police station from the sequel, but in the remake, Carlos makes the journey. It’s little more than a jaunt, but it added more to his storyline than Jill’s original trek. Second, the game is, of course, much prettier this time around. Third, since Jill is a bad-ass member of STARS, the combat is a bit more forgiving compared to Resident Evil 2. Jill seems to be adept at handing all the weapons in her arsenal and, like the original, she can now dodge if the gamer times the controls perfectly. In fact, if a gamer masters the dodge, they become an almost untouchable force. This fits the general tone of the game as Resident Evil 3 (both versions) sacrificed some elements of survival horror for tradition combat mechanics as it is much easier to find ammo (and weapons!) in the third game compared to the sequel. Finally, the game allows for more customization than Resident Evil 2. This is mostly because the “Shop” feature that opens after the game is completed provides upgrades that can be purchased. These include items that can increase health, defense, offense, and even weapons with infinite ammo. While Resident Evil 2 presented multiple playthroughs via storytelling, Resident Evil 3 does so through gameplay tweaks.

For these reasons, my first two playthroughs of the game were very enjoyable. Unfortunately, after a while, I began to side with the other critics about the game who probably experienced exactly what I did. For the price, the game is way too short. Speedrunners may be able to beat Resident Evil 2 in ninety minutes, but there are still at least four different stories to experience as well as the game’s ample bonus content. I beat Resident Evil 3 in about six hours during my first playthrough, and it’s possible to beat it in ninety minutes. Having said that, it’s the same game over and over again, which became monotonous after a while. This monotony extends to Nemesis who isn’t terribly scary in the remake. Unlike Mr. X, he will occasionally drop some nice items, but he becomes a nuisance after the first few encounters. While I thought the first major battle against him was awesome, the latter ones were so repetitive that I just wanted them to be over.

In lieu of “Mercenaries,” the major addition to Resident Evil 3 was an entirely new action/item management game called Resistance. I knew what was in store thanks to Capcom’s push to advertise the game on social media, but my experience was short-lived and disappointing. As I installed the game, I watched as it required a considerable chunk of hard drive space in addition to the data required for the main game. Then I watched as the game was looking for my network, a dead giveaway that this was a purely multiplayer experience. This was confirmed after I played through the “Mastermind” and “Survivor” tutorials only to discover I could “practice” if I wanted to play the game alone. I quickly deleted Resistance. Several gamers seem to love it while others hate it. To me, it feels like a failed or prototype version of a pay-to-win freemium game that Capcom flirted with in order to drum up future interest. They knew fans would jump at the opportunity to buy a remake of Resident Evil 3, so the game was just tacked on somewhere in development. If gamers enjoy it, more power to them, but it feels like a cash grab to me that prevents Resident Evil 3 from being a great game instead of just a good one.

Resident Evil 3 is a tricky game for me to review because I wanted to prove other reviewers wrong. I was ready to give this game at least a 7 after my first playthrough as the “Shop” feature made it seem like completing in-game records would be fun (albeit tedious). Eventually, I began to side with these reviewers, the last straw being my very brief experience with Resistance. I would have been much happier if Capcom spent its resources making Resident Evil 3 a better overall game. Instead, Capcom made some questionable judgment calls with the remake, including cutting about 1/3 of the original. Additionally, there really aren’t that many (if any?) DLCs with rumors circulating that none are in development. Importantly, I had a blast with Resident Evil 3 and thought that it would hold my interest for a modest amount of time. I bought it for $40, so I can’t justify spending more than that on what probably amounts to about 20 hours of fun. I’d probably say anything more than $30 is too much at this point, so wait for it to go on sale if you haven’t picked it up. While the combat is a little more enjoyable compared to Resident Evil 2 (as it was in the original), we’re still left with a game that pales in comparison to its predecessor. Maybe we can admit that Resident 3 Nemesis was always the black sheep of the Resident Evil series for a reason?