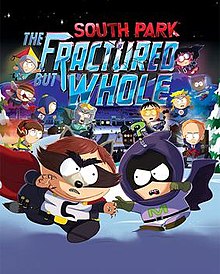 South Park: The Fractured But Whole

Spoiler Alert: Sparked joy is related to how much you like South Park. (I know. Shocking.)

South Park is so culturally relevant that it is appropriate to say most people have a favorite memory. The show premiered when I was just starting seventh grade, so of course I found stuff like a talking piece of poo hilarious (although that sentiment has changed for most people, including myself). After around 9/11, it became obvious that South Park was gradually positioning itself to tackle social issues. These cultural critiques almost always toed the line between hilarious and cringeworthy. That remains South Park’s MO: always has been and always will be. I have my favorite episodes and characters, and I played The Stick of Truth when it came out in 2014. It was a hilarious game and I was bummed when I beat it because the replay value was minimal. The Fractured But Whole came out in Fall 2017, so it is safe to say I am way behind with this review. Is it as good as The Stick of Truth? Granted I played the predecessor six years ago, but this might be one of those “the game you played first is the better game” scenarios due to the novelty of a South Park RPG.

Like The Stick of Truth, The Fractured But Whole is basically a 20+-hour South Park episode that extends the Coon and Friends and Mysterion story arcs; the entire plot centers on all of the kids in the series competing to see which superhero team has the best plan for a cinematic universe. Fans (like me) will love the intricacies of a world that has been building since 1997. Casual gamers will be completely lost.  While I won’t dive too deep into the story because anyone can do that just by watching a smattering of previous episodes, much of the content dealing with race and gender is pretty terrible (for example, the game’s difficulty level is influenced by the color of your skin). Sometimes the game surprises you with its nuance as was the case with the “microaggression” battle mechanic that gives the gamer an advantage if an opponent utters a derogatory statement. Other times, the subject matter is too crass. As I previously said, however, that’s South Park in a nutshell, so it is pointless to review subject matter like that, especially since most publications addressed those concerns when the game came out. Although it has been a couple of years since I tuned in regularly, for the sake of fanhood, here are a few things I like and dislike about the story:

Now that this list is out of the way, I can talk about the game itself.

The Main Represented Genre: The RPG

Each character has hit points, but there is not a magic points system like in other RPGs. Instead, every character has three class-specific options that they can utilize while a super move gauge fills up at the top of the screen. The only additional feature I can recall is that the protagonist—a young hero who can harness the power of their farts—can use a special fart skill every three rounds that can upend enemy progress. The gameplay is competent and occasionally immersive, but fans of the genre might not be impressed by the overly simplistic style after playing more elaborate games. Still, because it is a role-playing game, there are other familiar elements in The Fractured But Whole.

Rudimentary best describes The Fractured But Whole. The hero gets into fights, levels up, and repeats the process ad nauseum. However, I finished at Level 11 over 20 or so hours, so gamers hoping to max out their character will be disappointed. In fact, the only real benefit of leveling up that I discovered was that additional levels unlock a slot to place “artifacts” that the gamer can collect. These artifacts are actually what influence stat allocations to the entire party over the course of the adventure. The gamer can also level up their “Crafting” skill in a system similar to bolstering alchemy and blacksmithing skills in Skyrim.

The hero will gain necessary medicinal, costume, or offensive junk to make various items. This process is incredibly easy as the gamer can just walk all over South Park and eventually collect thousands of items simply by interacting with the environment. While the feature itself is fun, “Crafting” has a level cap of 20. Additionally, the level cap for experience in general is 15, but the last item slot opens at Level 10. In other words, there is no benefit to leveling up or collecting items once the only skills are maxed, eventually rendering exploring itself obsolete.

It is also worth noting that the game eventually unlocks every character class, so the gamer can mix and match four skills. Although it is fun to test out every move, this design move can also take the fun out of curating a character class compared to more complex games like Dark Souls. Of course, another common feature in RPGs is the implementation of mini games influenced by other genres (see the Yakuza games for examples). The Fractured But Whole has a few mini games that are pretty fun, including a raunchy lap dance and a ridiculous Flappy Bird parody that satirizes Kanye West. The only other mini game I encountered was an annoying button-masher that involves sitting on toilets and…yeah. Ultimately, these mini games are a mixed bag completely reliant on the humor of South Park to carry them through. Some people will love them while others will absolutely hate them.

So It’s Not Really a Genre-Melder?

Not only are the mini games reliant on South Park’s humor, but so is every single battle. There are moments when the humor really brought out the best in a boss battle as evidenced by the battles with Spontaneous Bootay, the Raisins Girls, and a few others. They were raunchy and crude, but they also had some great mechanics going for them. There were other battles, such as the battle with the Lovecraftian Elder God Shub-Niggurath and the Woodland Critters, that had some interesting elements, but they got old fast. Then there are battles that are just annoying and must be suffered through for ridiculous stretches of time. Ultimately, the humor often masks the general tediousness of the entire game; it can be very repetitive in almost every facet, which can be a downer when the story enters content or introduces characters that one may not find enjoyable. This extends to exploring a wonderfully crafted work like South Park because even though it is great to see where many of the show’s locales are situated on the world map, there is also a lot of recurrence as the gamer will travel and fast travel to the same locations multiple times over the course of the game. If the humor can carry the narrative and gameplay, the result is an enjoyable RPG. When the humor cannot carry either, it becomes a chore.

At its lowest, I would rank The Fractured But Whole a 3. At its highest, a 7. It is an amusing South Park adventure that fans seem to appreciate while non-fans won’t even bother picking up. Eventually, it becomes a game that runs out of content and just throws nostalgia in to keep gamers on their toes. It even refers back to The Stick of Truth on multiple occasions for some quick laughs. Most of the time, the humor, especially during battle sequences, is funny and worth listening to. Additionally, this humor can aid in building strategy to a degree given the limitations of its design. Other times, the game in general is way too tedious and you will find yourself going through the motions just to beat it. I am not really sure if the game is motivation to get back into South Park or justification that I’ve sort of grown out of it. Due to quarantine, I am more inclined to agree with the former and will probably jump back into the series. It is a game that should be consistently on sale at this point, so it is worth picking up and playing, even if you are like me and delete it from your hard drive after you beat it once. Is it a great game? Not especially. However, is it a game that has fun qualities? Absolutely, provided South Park’s humor makes you laugh out loud more than cringe.