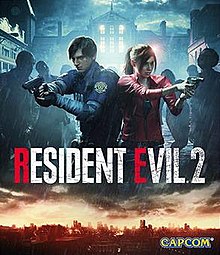 I was stashing the remake of Resident Evil 2 for a special occasion, so why not All Hallows’ Eve? There are a few series that just do it for me. Resident Evil is one of them. I didn’t get a PlayStation One until Christmas 1997, but the first installment was one of the first games I played for the system. I believe I picked up the original Resident Evil 2 close to its launch date in 1998. I beat 3 a couple of times. While it was a good game, it felt more like a follow-up to 2 rather than its own entity (the gunpowder feature was neat, though). I played Code Veronica a few years after it was released, so it looked a little dated by then. That said, I had fun playing it, even though it might be the campiest entry of the entire series. I consider Resident Evil 4 to be not just one of the best survival horror games ever made, but one of the best games period. Almost everything about it kept me invested from beginning to end. Resident Evil 5 reintroduced Chris (and introduced Sheva, whom I thought was one of the best companion characters). Even though the story was pretty nonsensical at times, the mechanics of 4 as well as the multiplayer option made it fun. Then I played Resident Evil Zero and the remake of the first game. I had fun with both, even though the “drop items wherever” feature in Zero took a little getting used to. Finally, Resident Evil 6 was sort of a disappointment (which is a standard lament among the fanbase), and Resident Evil 7 was pretty great, even though it really didn’t become Resident Evil-esque until the last hour or so. If anything, it felt like if Rob Zombie made a Resident Evil game. In any event, what better time than this spooky week to follow up Silent Hill Homecoming, which I hadn’t played in years, with the next installment of Resident Evil that was just dying to be played?

I recall being pretty good at the original Resident Evil 2. I unlocked all weapons as well as the Hunk and Tofu alternate storylines. However, I actually started Claire’s first scenario of the remade game and was pretty terrible at first. As a result, I shelved it for a few weeks and only just started to play it again for this blog post. If I had to put this game into terms that my 7th Grade Self would appreciate, it’s about 70% new and 30% old, meaning there is just enough nostalgia to appeal to the days of console wars and game exclusivity, but it is new enough to create an entirely new gaming experience. Still, some of these changes didn’t come easily for me when I played. First, the game is gorgeous. However, even though it never quite reaches uncanny valley territory of character design, it is quite possibly the most Western-looking Japanese game I’ve ever played. While this isn’t a bad thing, some of the aesthetic choices took a little getting used to. Second, thanks to improved graphics, the game is much gorier this time around. Now there are gruesome scenes like disembowelment that are quite shocking at first. Granted that there was still plenty of gore in the original game, I wasn’t initially prepared when I saw viscera and brains in the remake. Third, the game is much darker. I don’t mean thematically, but literally as it is often very hard to see (especially in the police station). At times, the darkness adds to the appeal of the game. Other times, I had to adjust the brightness on my screen. Fourth, the game is much harder this time around. It used to be that 4-5 handgun bullets would take down a zombie and an acid round would put away a licker. Now, it sometimes takes 10+ bullets to kill one zombie, and lickers are harder to dispatch (provided you make a few direct shots and account for their speed). Finally, the Tyrant encounters have been radically modified. I’ll get to him momentarily.

While the stated purpose of my blog is to find genre-melders that spark joy in my life, the remake of Resident Evil 2 is an example of a conventional game that still sparks joy. All things considered, this is a pretty standard item management survival horror game influenced by its predecessors. Whereas more recent Resident Evil games utilized certain customization elements that bordered a rudimentary RPG leveling up system (i.e. customizing weapons and increasing health), there are no such components in this game. Aside from a plethora of costume changes, the only customizable features in the remake are a few weapon mods as well as the returning gunpowder system from 3 and 7 that allows Claire or Leon to make ammo for three different weapons. That’s about it, so I gradually had to come to terms with the fact that I was playing a return to a former Resident Evil state rather than a genre-melder.

However, there were some things that really frustrated me while playing Resident Evil 2, and I had to confront those issues before I started to enjoy the game. First, the learning curve of the game is incredibly hard, especially at the beginning. There’s resource allocation, and then there’s potentially not having enough ammo to take on a boss. As previously stated, enemies are much harder to take down this time around, and they are often difficult to evade in many situations. It doesn’t help that zombies can occasionally speed up or veer into your evasion route, causing you massive damage if you don’t have a sub-weapon. Further, the lickers now have ridiculous range that allows them to basically jump the entire screen to attack you and place you in critical condition after one hit. That is to say nothing about the G Mutants in the sewers that take precious rounds of powerful ammo to defeat AND they can poison the protagonists if they aren’t careful. In the sewers, they felt like mini-bosses, but since there were 6-7 of them, they were a bit too frequent for my liking.

This critique extends to my experience with the bosses (or variations of William Birkin). While they are grotesque and interesting to look at, almost every single encounter came down to shoot, run, turn around, fire, repeat. Still, at least there was a sense of accomplishment with these bosses as there was no such feeling with the renowned Tyrant “boss.” In the original game, the Tyrant is one of Umbrella’s biological weapons that follows the protagonists during the “second run” of either character. While he is tough to take down, the character receives some ammo as a reward for doing so. In the remake, the gamer does not receive such a reward. Further, instead of set points during the game in which Tyrant appears, Tyrant appears in the remake immediately after he is triggered. He essentially follows the character the entire time they are in his line of vision. Even worse, there is no way to stop him as he will just continue to follow the protagonist. On one hand, this new Tyrant highlights a sense of urgency that isn’t in other Resident Evil games (save for Jack in 7) . On the other hand, the gimmick quickly becomes annoying and frustrating. These feelings are further exasperated when the character doesn’t kill an enemy in a portion of the map that the Tyrant might spawn in, rendering it a potential death trap in the process. Some gamers may love Tyrant for what he brings to the experience. I was personally way too stressed out whenever I saw him on the screen.

Despite these critiques, I thoroughly enjoyed the game for many reasons. For starters, the police station is much more threatening this time around. Yet after a while, it’s quite easy to navigate. The new changes were unique as it was interesting to read that the police station was actually an old art museum. That little tidbit was missing in the original game, but it makes so much sense now. I also liked that the design of the locations made backtracking to retrieve key items somewhat fun on occasion. In this sense, I loved the item management component as it allowed me to challenge myself to see what was vital for a certain leg of exploration and what was superfluous. I also loved the character changes as every character is much more fleshed out in the remake. Finally, I liked the moments following successful ammo rationing in which the game sometimes rewarded you by encouraging you to try out some new weaponry. It didn’t happen often, but these occasions of action-adventure over survival horror were very fun.

When Resident Evil 2 is on point, it’s one of the best games of 2019. However, when it’s off, it makes me want to throw my controller. Still, it’s a game that begs for multiple playthroughs. Now that I am on my second playthrough, I can tell this game gets better over time. It might not be a genre-melder, but it’s a return to an era of gaming that holds a lot of sentimental value. It’s fun, frightening, and frustrating, and all three components are inseparable from this creepy gaming experience. I’m not sure if this is a game I’ll return to very frequently after I unlock the achievements that I want, but for the time being, this will be in the game rotation for a while. Happy Halloween!

(The game doesn't fit neatly in my rating scale, but this will have to suffice for now.)