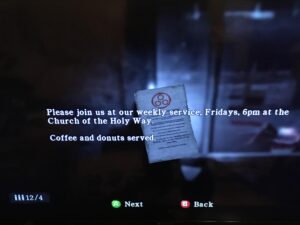 After a work hiatus, it’s time to bring the blog back. I mean, how else am I going to discover if these games spark joy in my life unless I have some sort of way to be accountable? Since it’s October, what better time than to play some spooky survival horror games? Fortunately, I have just the game that I’ve been putting off for almost ten years: Silent Hill: Homecoming.

I’ve had a weird relationship with Silent Hill. The first game was creepy, but I had more fun with the Resident Evil series at that point in time. Silent Hill 2 is without question one of the best horror games ever made thanks in large part to its psychological themes and soundtrack. Like most people, I believe that Silent Hill 2 provides the definitive series experience. However, I thought Silent Hill 3 was a step back. It was certainly creepy, but the game returned to the cult themes seen in the first game rather than relying on the psychological loneliness that made the sequel so great. That said, Silent Hill 3 has some of the strongest tunes in the series. I never picked up The Room or the off-shoot games that have been in circulation for a couple of years. I also recently just purchased Downpour. It’s going to be a while before I play that game because the intriguing storyline was crippled by a horrible combat system. By default, it was time to play Homecoming.

By now, the tragic story of Silent Hill: PT is well known. While not nearly as sad, Homecoming was developed by the now-defunct Double Helix Games, meaning that it was the first American game in the series. However, the Japanese version was canceled, which immediately makes one wonder If Konami wasn’t pumped for the game. That said, the game still features a soundtrack by acclaimed composer Akira Yamaoka, meaning that if we referred to Platonic ideals, there is enough “Silent Hillness” in the game to make it feel like a Silent Hill game. Perhaps in order to drive this point home, there are many subtle nods and explicit connections to previous games that are either well-timed (i.e. giving Cybil from the first game a shoutout) to almost unnecessary (the personification of Pyramid Head, even though he was a product of James’ desires to be punished for what he did to Mary). I tried to play this game twice in the past, but once I got to the sewers, my motivation to play severely plummeted. This time, I forced myself through the slog and even enjoyed the game in areas. 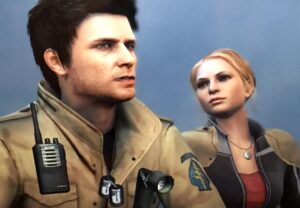 This is Alex. It's taken me ten years to get this far in the game, let alone beat it. This is also the only point of levity in the game save for one of the endings.

Silent Hill: Homecoming is notably different from other games in the series because much of the game takes place outside Silent Hill in a town called Shepherd’s Glen. For me (and I’m assuming many others), this is sort of a disappointment since the town is so renowned in gaming lore that it’s basically its own character. This momentary departure is one of the reasons why it took me a while to get into Silent Hill 3 because Heather Mason had to travel through five large dungeons before she even made it to the eponymous town. Homecoming doesn’t even begin in Shepherd’s Glen as the game’s protagonist, Alex Shepherd, apparently flees a mental institution during one of the hardest tutorials I’ve ever encountered in a game. Following this rather long dungeon, Alex awakens in a semi as he approaches Shepherd’s Glen (the driver of the big rig is Travis Grady from Silent Hill Origins). In any event, Shepherd’s Glen looks an awful lot like Silent Hill thanks to some very dense fog and disturbing monsters. It’s certainly an atmospheric game, but the way the game infuses gameplay mechanics from other action-adventure games makes the game very frustrating early on, which would explain why it took me so long to complete the damn thing.

The difficulty of the game early on is one reason why this game struggled to spark any joy until I finally ventured to Silent Hill. First, even though Alex finds melee weapons like an axe and a steel pipe, the knife, which is acquired very early in the game, is somehow overpowering. Minus the mandatory events in which the latter items must be used to chop wood or pry a door open, the knife can take down many enemies in the game. Additionally, while it's tempting to use firearms early on (and almost required to beat some enemies), ammo is very hard to come by. Not only is ammo sparse, but it is capped to a ridiculously low amount that suggests firearms can only be used during very specific moments (fortunately, upgraded weapons are stronger and hold more ammo). This can be especially frustrating during boss fights in which it’s practically a given that you eventually will have to resort to melee weapons to take them down. That brings into question the other flaw with the combat system in that many of these enemies are impossibly cheap. Even with mastery of the “dodge” button, it’s very likely that poor Alex will be bum-rushed and will have to rely on stocking up health items if he stands a chance. Ultimately, especially leading up to the Scarlet boss battle, I dreaded fighting in Homecoming because it felt much harder than it had to be. 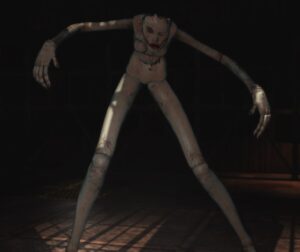 If you somehow reach this point with enough health items in your inventory and then win, you might just stick around to finish the game.

But my joy was sparked after this boss battle because firearms became better, Alex finally made it to Silent Hill, and the story, while not particularly innovative, began to take shape. Hell, it wasn’t until after this boss fight that the game even began to inform the protagonist and gamer why Silent Hill was even in the title, and the reason seems to have more to do with the Silent Hill movies than the games. Like Silent Hill 3, the series’ cult themes are front and center, but I suppose the silver lining is we are presented with an interesting twist involving Shepherd’s Glen. Nevertheless, the second half of the game felt stronger to me and I enjoyed it for being a fun survival horror romp. Further, it doesn’t happen for a very long time, but you also begin to sympathize with Alex for how bad his family is. He spends his entire time looking for his baby brother only to realize by the end that his brother sort of sucks. Of course, this also comes at the expense of pacing in the game, which could be improved dramatically. The game occasionally throws characters into the story without giving them any backstory, but then reveals how integral they were all along. With better pacing and especially a better combat system, my gut tells me this would be a better game. At least for the purposes of my blog, I’m glad I finally completed a game that was on my shelf for so long, but now that I’ve played it, there’s really no incentive to unlock the remaining endings. Still, in the spirit of Halloween, Silent Hill: Homecoming is worth a look during the spooky fall season.