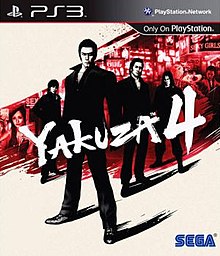 I guess I just can't quit this series.

Aloha, everyone. I thought I would have more time this summer to update the blog. I had to focus on other writing responsibilities, which cut into the time I could devote to this project. Additionally, I did that thing we all do where I start like five games at the same time and am just now finishing them (with the exception of Silent Hill: Downpour). In any event, I meant for the next AAA installment to be a nostalgia post as I replayed Suikoden V. Chances are that will be the next post. However, I also had Yakuza 4 on the back burner and completed it last night. On one hand, this means that I’ll review yet another Yakuza game, but on the other hand, I once again had a wonderful game with this gender-melding series. 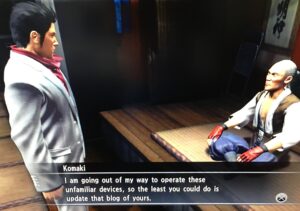 Komaki is back and he's figured out how to use a cell phone!

I previously wrote that Yakuza 3 was a fun game, but it was lackluster compared to Yakuza 0, Kiwami, and Kiwami 2. The fifth chronological game in the series is a significant improvement and it is my understanding that it is a fan favorite among the community. Although Yakuza 0 was my introduction to the series, this game was the first to include multiple storylines featuring four main characters, each with their own unique motives and fighting styles. Surprisingly, Kiryu has the least integral role in the story and serves mostly as mop-up combat specialist for the other stories. The amicable loan shark Shun Akiyama is introduced first. He is easily the most hilarious of the four protagonists as he teeters between lovable moron (he forgets to lock his office and loses 100 billion yen) and hopeless romantic. Taiga Saejima is introduced next, and one could make the argument that game is his story of redemption. Fans of the series know that Saejima is Majima’s oath brother. This installment goes into detail about the Ueno Incident in 1985 (i.e. why Saejima was sent to prison and why Majima lost an eye) and makes it central to the main story. The third character is a crooked cop named Masayoshi Tanimura. Of the new characters, Tanimura plays a huge role, but many fans thought he was bland and forgettable. Allegedly, he might have appeared in future installments if it were not for drug allegations against the character’s voice and model actor. Sega is currently remaking the game and the design team actually had to hire a new actor specifically for this reason. I liked Tanimura as a character, but his two primary sidequests were so similar that they felt like slogs. His primary stor arc was interesting enough, however, and he was even granted the final boss fight. Following a brief introduction in Saejima’s story, Kiryu is introduced last and proceeds to do all sorts of Kiryu things from there. You know what I am talking about. The dude literally takes out a yakuza clan singlehandedly.

The story is equal parts riveting and wacky, but there are so many twists and turns that you will want to see how everything plays out. Just be prepared to suspend your disbelief because there are several events that require it. For example, hitmen in this universe must be pretty dumb because no one seems to check bodies. In fact, these blunders actually set up major plot twists that guide the story—which is about twenty five years in the making—to its conclusion. In terms of genres represented in the game, they are all accounted for. The combat system is significantly improved compared to Yakuza 3. While some fights remain forced, the fights are much faster and graphically superior. The skill system is also better than Yakuza 3, but pales in comparison to Yakuza 0, Kiwami, and Kiwami 2. Gamers can still visit the batting cage, pool bar, Sega arcade, karaoke bar, fighting arena, Tokyo Bay docks, and the golf course. Gamers can also visit the hostess club, even though the system takes a little getting used to. The game also features an endless runner system first used in Yakuza 3 that is simultaneously fun and tedious. Table tennis was included, although it is arguably the most fanservice-y component in the game as you play against a woman who just had a bath in the newly-introduced hot springs. I had the most fun with the fighter creator mini-game during Saejima’s quest. You run a down-on-its-luck dojo and train five losers who gradually become competent fighters. As they level up, they can compete in tournaments and raise money for the dojo. It was a total time suck on par with the cabaret club mini-game in Yakuza 0 and Kiwami 2, and I wanted to play more even after it concluded. 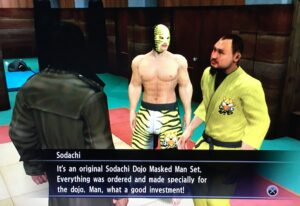 The fighter creator mini-game is everything you love about Yakuza and more.

Once I beat Yakuza 4, I learned that I only completed about 13% of the game, meaning there is considerable replay value. Alas, I do not think I will play any time soon due to other games on the horizon, but perhaps I can see more content down the road. Ultimately, Yakuza 4 was more enjoyable than Yakuza 3, yet a few pegs below the other games that I thoroughly enjoyed. I don’t think this has anything to do with the game being nine years old, but rather those other games are just that amazing. If you still have a working PS3 or want to wait until the game is remade, give Yakuza 4 a shot. I’ll hold off on playing Yakuza 5 for the time being so that I can see what other games or series spark joy in my life for future posts.