Let’s go back to the Indieverse. What do you get when your gaming experience is better than Creature Romances, but does not quite have the replay value of Black Closet? Purrfect Date might be an example. I went into Purrfect Date without any expectations, especially since I was let down by Creature Romances. It is weird and certainly caters to some very specific gaming tendencies and/or fantasies. While Creature Romances was a clear joke/parody visual novel that was uncanny for the sake of being uncanny, Purrfect Date does play with generic conventions in quirky ways, offering some replay value in the process. The game was created with Unity and it was promoted via Steam Greenlight before Valve ended the service. As an indie visual novel, it is hard to justify paying the full price tag of $9.99. However, through a Humble or Steam sale, it is bound to spark some joy.

The plot of Purrfect Date is that you guide six young research assistants who find themselves on a research island populated by feral cats. From what I encountered, there are six human NPCs and five sentient cats that the player-character will bump into (you might encounter more cats along the way).  While pre-set physical characteristics might inhibit full transformation or role-playing with these six research assistants, stories weave across multiple playthroughs. As soon as the player-character arrives on the island, they meet Professor Pawpur. After this encounter, they stumble out of bed on the first night, enter the realm of the feral cats, suffer an attack, and essentially become a were-cat. While there is no known cure for the disease that will eventually turn them into a cat, perhaps an antidote can be crafted on the island. 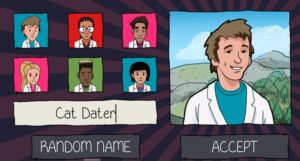 From what I have gathered, you play through a game with a character and continue the process until you have achieved as many endings as you wish. Additionally, a clear (ish?) idea of what is happening on the island will not develop until the gamer plays as each research assistant. The game also has social/dating simulator qualities. For anyone who is familiar with more complex visual novels or AAA titles like Persona, what you do in your downtime determines much of the action in the game. Whereas these events might not have much of an impact on the main narrative in a game like Persona, these events essentially determine the ending in a game like Purrfect Date. 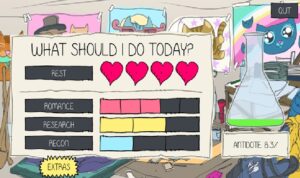 Interestingly, it was not initially clear how time was kept in the game, and time only seemed to matter when a new research assistant arrived on the island. I am used to mechanics like having one or two downtime events before the game advances to the next day. In Purrfect Date, it appears that you are free to conduct research and recon missions, and even pursue romantic opportunities until your energy depletes (which is an ending itself). After you rest, it seems you start the cycle up again. This is great for those who want to quickly get through visual novels to unlock as many endings as possible, but perhaps not so much for those who hunker down and invest in a visual novel like it were a long book (I got through six playthroughs in about three hours). As you can see from the beaker labeled “Antidote” on the right, it takes time to craft the were-cat cure. I thought I would hit 100% by the last research assistant, but I clocked in around 84%. 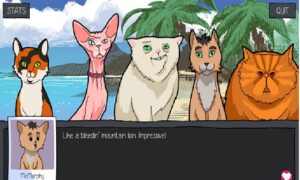 This is probably a good place to discuss the generic conventions in Purrfect Date. Essentially, you can conduct three research projects and three recon missions during each playthrough. The game ends once you finish the third research project. Since this game is designed to be played multiple times, the research and recon data carry over each game. For many gamers, the romance option piques their interest the most. Yes, you can go on dates with cats and romance them to your heart’s content (five dates anyway). Each cat has their own unique personality and you learn about their quirks while spending time with them. Are they the deepest characters ever? Naw. You will discover that some are even stereotypes. For example, McMurphy is an alcoholic Irish cat. Snooty Booty is a posh sphynx cat that loves to be pampered. That being said, the cats are pretty humorous and offer their own insights on the island in their own unique ways.

Unlike many visual novels and dating sims that allow you to court as many individuals as possible, Purrfect Date allows you to date just one cat. Based on my experiences, as soon as I decided on one cat, the other available option became off-limits. While interesting, this “lock-in” feature exists primarily to speed up each playthrough. However, there appears to be a twist in that certain responses with your cat lovers might produce the opposite effects and your character may be rebuffed if they choose incorrectly. Ultimately, if you are serious about unlocking the endings in which you have to fall in love with a cat, you may have to challenge their existing world views rather than agree with them. 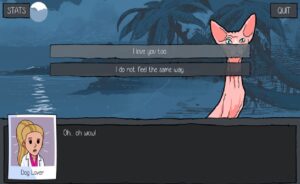 As previously stated, I have made it through six playthroughs. I might find more endings and I might not. While there is incentive to do so, for some reason, Purrfect Date occasionally pushes my laptop to the edge and my cooling fan is activated just a couple of minutes into the game. Laptop concerns aside, Purrfect Date is cute and quirky. However, the game does have some flaws that impede my experience. The most noticeable is the lack of a skip dialogue feature, which makes you overwork your spacebar to advance the story. Additionally, it seemed as if my interest level dropped following each playthrough to the point that I did not find side-narratives that engaging after a while. By the time I got to the extra pirates story, I was more invested in unlocking endings than I was associating with the characters. This has more to do with my own gaming predilections rather than the developers’ intent, but it felt like the designers were cognizant of this fatigue because the latter research assistants became self-aware that there was no reason to go into any additional exposition since they already read the file. Ultimately, there is enough intrigue and dark twists that might warrant a future playthrough or two. However, the endings began to feel somewhat repetitive. I am sure there are some endings that stand out, but I guess I am in no hurry to find them. As it stands, I have seen enough of the game to step away and think about the next game in my lineup.