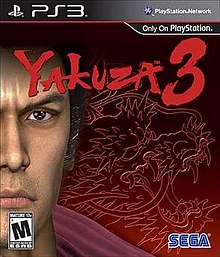 Let’s go back to Kamurocho, which means we have to go back to 2009 to play the series’ first PS3 installment.

After I finished Yakuza 0, I purchased every main Yakuza game. Kiwami was first since I was able to pick it up with PS Plus. The next two purchases were Kiwami 2 and the After-Hours special collection of Yakuza 6 that came with some snazzy bar glasses and whiskey stones. Shortly after that, I purchased 4 and 5 using my PS3 PSN account. It is my understanding that both are great games, but I had to play the third (fourth chronologically) before I could proceed. I purchased Yakuza 3 last because 1) it was the hardest to find, and 2) many fans consider this to be the worst Yakuza game. Now that I am invested in this series, “worst” actually means “least best,” so Yakuza 3 is going to be fun no matter what. However, I had to drop $50 on a PS3 game, which was certainly a Tiger Drop to the stomach. So, dear reader, while my PS3 downloads Yakuza 4, let’s spend some time discussing Yakuza 3.

I will just get this information out of the way now. Yakuza 3 was the first in the series to be released on the PS3. It was released in 2009, so it is ten years old. If you are like me and are playing this series from 0 onward, the graphics will look dated at times. Second, much of the content in the Japanese version was removed from the Western release. Reports indicate the number was between 13-20% of the game. While the main story was not touched, several of the side quests and mini-games were. Third, a remastered version of 3 was released in Japan last year. While there has been no official report on a Western release, it is likely the game will eventually make it to our shores. Consider all three of these factors before you throw down and buy the game.

As I already stated, many fans consider this to be the weakest Yakuza game. I just finished it, but I can confirm that the main story constantly toes the line between nonsensical and “Where are you taking me, game?” There are some riveting moments and interesting twists, but there are also some story threads that are absurd even by Yakuza standards. Additionally, some threads are not resolved and require almost professional wrestling levels of suspended disbelief. The pacing is also pretty slow at the beginning. Remember in Kingdom Hearts 1 and 2 when you had to run around the island and town respectively for about an hour or so before both games really took off? I saw similarities in Yakuza 3 because I spent roughly eight hours in Okinawa before returning to Kamurocho. While it was cool to see Hawaiian Shirt Dad Kiryu take care of his children at Sunshine Orphanage, the game sort of dragged around this point. After this initial slog, the game does pick up steam, which ultimately makes it more entertaining.

That is one hella pretty beach, though.

Now that I am four games deep in this series, I have noticed that each game has something unique that does not appear in other installments. In this game, Kiryu actually becomes a blogger who snaps fortuitous pictures of residents doing zany things. Examples include a drunk businessman who tries to pole dance on a street lamp, a bowler who picks up a strike by slamming his body into the pins, and a woman who does a front flip on a scooter because she is distracted by a marquee featuring an attractive Korean celebrity. Once Kiryu snaps a picture and blogs about the event, he learns a new move. I find it hilarious that Kiryu becomes a blogger and each event maintains the humor that the series is known for. 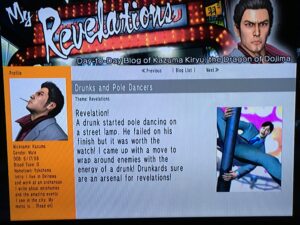 This mentioning of the game’s fighting system is a nice jumping off point to discuss how the game melds genres together. Since this is a Yakuza game, such conventions are expected. While this game is ten years old and I started with Yakuza 0, I must be a bit more reserved with my critiques. Having said that, fighting is a major component of the Yakuza series, and it is not as fun as the previous games. The action is still fast, which is a plus. However, the game actually slows down when fights are triggered because a person runs up to Kiryu, forcing a loading sequence. Compared to the previous games, fights are more of an annoyance than enjoyable factor. There were moments when I was incredibly frustrated with fighting because just as soon as I was done with one group of enemies, another group was waiting just a few feet away to stop me again. Second, it is much harder to level up in Yakuza 3 compared to the other games because these opponents leave money or items. In fact, EXP is at a premium in the game as the only two ways to gain it efficiently are through completing the main quest and side quests (I noticed that side quests appear harder to find in this game). Third, I was not terribly impressed with the game’s level up system. While the previous games (again, these are remakes) allowed you to choose which stats you wanted to increase or skills you could learn, Yakuza 3 basically forces you to level up four bars until each hits level 10. Each level has preset moves or skills, meaning many of the series’ RPG elements do not allow for much agency.

Honestly, there were moments when the other genres were more entertaining than the game’s fighting system. The golf game took a little getting used to, but once I figured out the mechanics, I discovered a competent golf engine. The baseball batting cages remain in the game. Darts, billiards, fishing, and karaoke are also staples. Additionally, gambling and the fighting arena have been revived. There are also some mini-games that were axed from the Western release, including the hostess club that many fans enjoyed in 0 and Kiwami 2. Ultimately, there is fun stuff to do in Yakuza 3, but I eventually had to stop playing these in order to progress the main story. This meant that I had to return to fighting, which eventually got old. However, I will never get tired of Majima, and it was great to see him once again.

Since I started Yakuza 3 immediately after Kiwami 2, the game understandably looked dated. While I expected to be disappointed, the inherent zaniness of Yakuza 3 eventually allowed me to overlook the graphics and I became immersed in the world (it should be noted that the cutscenes are actually pretty solid). While I am glad I played the game, the unevenness of the story, the lack of side quests compared to previous games, and the repetitive fighting mechanics and dull RPG elements do make it the weakest in the series. Again, however, the “worst” Yakuza game is still incredibly fun by most gaming metrics, so check it out if you have the coin. If, however, you can wait until the remastered game, this is not a titled that you need to rush out and buy.