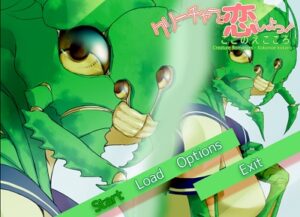 Honestly, I was hoping it would be weirder. And longer.

I purchased Creature Romances for a dollar during the Hot Date Humble Bundle. For those who have not purchased the bundle, it is littered with several visual novels that play with dating simulator conventions in very weird ways. However, the bread winner of the bundle is Clannad, which will certainly be reviewed at a later time. My co-researcher and I each bought the bundle and we allocated our games accordingly. I volunteered to play Creature Romances: Kokonoe Kokoro.

I’m actually drawn to weird games that come out of leftfield. I grew up with anime, so I enjoy games that know they are weird or untraditional, even if it means they are weird for the sake of being weird. As I fired up Creature Romances, I silently said to myself, “Please don’t make me like you, game.” I knew what was coming, but the initial shock of seeing that my high school crush was a grasshopper in a sailor school uniform secretly drew me in. . .or at least I wanted it to. In fact, I was actually hoping that it would be weirder. And longer. 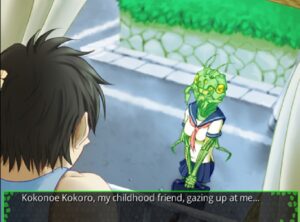 On the surface, Creature Romances is a visual novel that many people want to root for. It started out as Japanese freeware before the Western company Sekai Project localized it for Western audiences. Occasionally, there are charming moments that are sweet. I was also impressed that the game had Japanese voice-acting, which is a rarity with cheap or free visual novels. The story itself is a pretty standard slice of life visual novel that centers on a very short period of time as the protagonist ponders what to do after graduation. While his friends wish to enroll at the prestigious Tokyo University, he is a slacker who knows he will never get into the school because of his lackluster grades. However, the key feature of this slice of life story is that he is a human being, but everyone else around him is a monster. As previously stated, his childhood friend is a grasshopper with mammalian breasts. His current best friend is some sort of demon skeleton hybrid. His sister is a bat. Finally, his homeroom teacher is apparently the Butterball Cenobite from the Hellraiser movies who decided that he was tired of enslaving souls and wanted to put his secondary teaching degree to good use. If this weirdness appeals to you, I’ve got bad news. Those are the only characters in the entire game. Even worse, the game almost immediately deviates from the weirdness and almost seems to take itself seriously as a cliché visual novel. 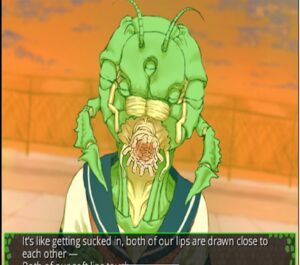 Okay. Maybe I wasn't prepared for that scene.

As this site is devoted to genres, I regret to inform you that Creature Romances doesn’t do anything new with the visual novel genre, nor does it meld generic conventions together in unique ways. In fact, I beat the game in less than an hour and I can’t imagine I’ll pick it up any time soon since I apparently unlocked the true ending by picking one choice from three potential options. In fact, I believe this was the only choice in the game. Ultimately, the novelty presented in Creature Romances can’t sustain itself as it eventually feels like other visual novels out there. In fairness, there is an otome version of the game that swaps genders so that a human woman dates male monsters. That game is not currently in my library, nor am I going to rush out and make it a reality once a Western version is released.