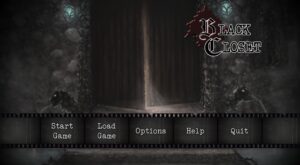 Becoming a school council president sparked some joy. But how much joy?

To show you the breadth of games I am dealing with in my library, let’s move on from Yakuza Zero to Hanako Games' Black Closet. I’ve been on a visual novel kick lately due to some current publication research I am working on. I think I’ve researched twenty or so of these games the last two weeks (especially VNs created with Ren’Py). As you would probably suspect, the quality can range from high school class project to professional video game. Black Closet might not have the most riveting story I’ve ever encountered, but I did have fun playing it due to its generic conventions.

The premise of Black Closet is that you are the recently elected (drafted?) student council president at an elite British girls’ academy. Whereas I’m pretty sure that the only thing my high school student council did was arrange the Winter Ball dance, your duties in Black Closet involve detaining, suspending, and even expelling wrongdoers who sully the reputation of your school. In true video game fashion, the powers-that-be decided to grant an 18-year-old woman power to keep the school in check from petty crimes. Furthermore, a traitor walks among you, and you must find them before they burn down the school (that’s at least what happened during one of my playthroughs). The game also has yuri elements in that you can romance the other young women in the student council. If the setting, characters, and yuri elements were any indication, I wasn’t exactly the target audience for this game, but I actually enjoyed it quite a bit.

Romantic narrative branches are a pretty standard generic convention in visual novels. Yet I found myself disinterested in these conventions compared to games like Persona 5, Danganronpa, or even Doki Doki Literature Club. What struck me about Black Closet was its incorporation of detective and table top elements as you attempt to solve crimes based on the skills of your “minions” who carry out your orders. Due to these additions, Black Closet is a relatively complex visual novel compared to others that I’ve seen, which is interesting since Ren’Py is primarily used for simple visual novels. Further, if a case is successful, you are awarded additional skill points that can be given to your minions like a simplified RPG. 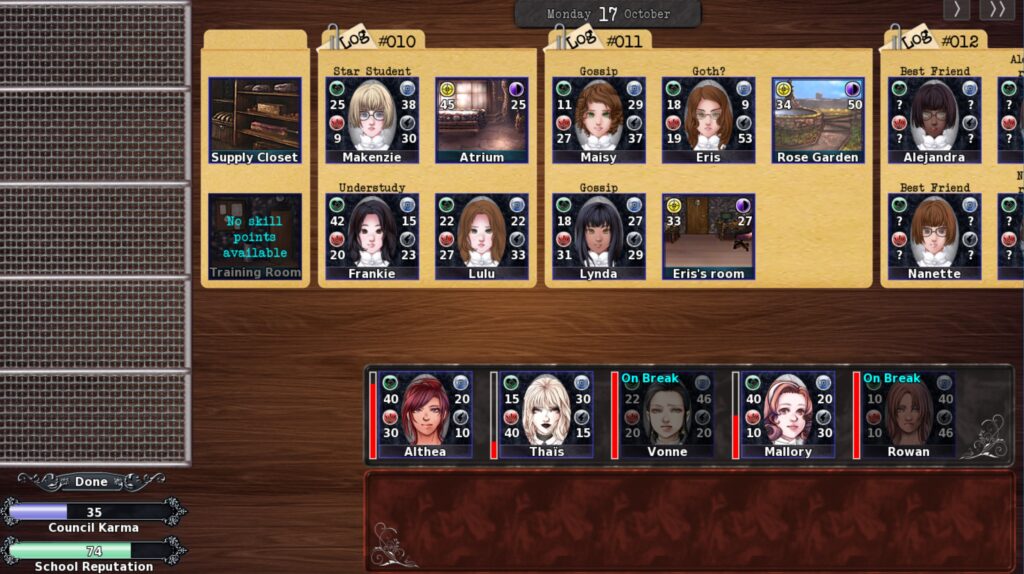 While not the most aesthetically appealing interface, it doesn’t take long for you to figure out how the game operates. However, if you will succeed is another matter.

As one of the primary tenets of this blog is to find enjoyable games that meld generic conventions, Black Closet has some neat features that piqued my interest. When I play visual novels, I sometimes tune out the story early on if it drags (which is a terrible way to interact with the genre), so it was great to see interactive features that kept me interested from an emergent standpoint. There were moments when the pacing seemed off as there were only a few gentle reminders that this game is time-sensitive, but it wasn’t as severe as Hanako Games’ similar game Long Live the Queen during which your character can die if their skills happen to be at a disadvantage during random events. Still, there were times when my success/failure rate during cases in Black Closet was entirely random despite the advanced skills of my minions, and there were others when the progression of certain stories became too cryptic to advance. Much of the time, it’s a toss-up if your strategy is going to work, which sometimes became annoying despite my best efforts. Further, the interactions and/or dates with the minions began to repeat until I sort of lost interest in their personalities. One of you is the traitor, eh? That’s nice. Guess I’ll go back to trying to neutralize this girl who’s fascinated by vampires and won’t cooperate. In other words, I wasn’t completely invested in getting to know the women on the bottom of the screen in that picture and spent most of my time trying to solve cases to get more skill points. Come to find out, that’s a terrible way to play the game since one of them really is set on destroying the school. Guess I’ll have to go to the planetarium, the movies, or picnics again if I’m going to attempt to beat this game in the future. Ultimately, all of the “dates” with these young women felt similar, which impacted my perceptions of character progression.

Black Closet was a nice surprise, and I appreciated that Hanako Games showcased what you can do with Ren’Py beyond simply creating a visual novel. Admittedly, my critiques are subjective (I might be terrible at the game), so those can be taken with a grain of salt. I had an enjoyable time with the game, but I couldn’t see myself playing it for hours or days on end. If I'm asked to fork over $19.99 for a video game, I believe there is a justified expectation that I will be playing for a considerable length of time. That said, it’s not a game that I will just remove from my life either. This is the kind of game that would probably be most fun for me on a flight, waiting in a hotel room, or killing some time when the spirit moves me. As for you, if you’re into Hanako Games, visual novels, yuri, or detective gameplay, give Black Closet a go. However, at $19.99, your wallet might take a hit, so consider purchasing it when it goes on sale.