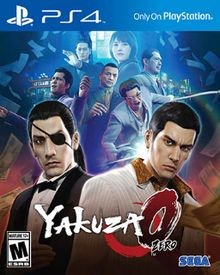 This post is long overdue, but it’s time to get the blog going! For my first post, it’s best to establish some sort of baseline for this blog. What exactly does a game need to do (or look like) to receive 10 Sparked Joys? Yakuza Zero can teach us a thing or two. Importantly, this doesn’t mean that all sandbox or open world games (at least in my mind) can achieve such a score. While this genre does provide greater perceptions of freedom and can generally contain elements from other genres, I find that the gaming experience either stagnates after a while or the addition of certain generic conventions are flawed to the point that they aren’t very enjoyable. The truth is that my dissertation heavily deals with perceptions of control in sandbox games, so I decided it was necessary to take a long break from them.

I bought the PS4 version of Yakuza Zero last October, but didn’t play it until December. Since then, I’ve purchased every game in the series, except for Dead Souls and the samurai spin-offs (I probably will get all of them). While I knew about the Yakuza series in the past, I was mostly oblivious to its content. In a way, this oversight on my part turned out to be a blessing in disguise because it allowed me to start from the very beginning of the series to witness the evolution of Kiryu Kazama, Goro Majima, and the district of Kamurocho beginning in Japanese’s economic bubble of 1988.

Yakuza Zero’s main storyline is gripping and melodramatic. However, I am not reviewing the story, but rather what makes it great in terms of how it melds generic conventions. I went into the game almost completely blind and was immediately struck by how well the battle system incorporated fighting, beat-em-up, and RPG elements. No corners were cut in the presentation of these three genres. While there are numerous fights, I never got tired of them and even willingly started to pick fights to increase my stats and acquire new skills.

Yet the battle system is only a segment of what gamers can expect in Yakuza Zero. I quickly fell in love with the game’s mini-games and side quests triggered by the eccentric residents of Kamurocho and Sotenbori. Like the fighting engine, I was impressed that all these mini-games were competent versions of games that rely on specific generic conventions for certain gaming objectives. For example, the batting cage mini-game was about as responsive as batting in MLB: The Show. Additionally, I don’t normally play rhythm games, but the dancing and karaoke mini-games offered some of the most enjoyable moments in the entire game. Another amusing mini-game found in Kiryu’s storyline is the pocket racing circuit, which allows gamers to customize toy cars to race against other characters in the game. I don’t know about you, but there’s something endearing about a hardened yakuza framed for murder explicitly stating that the pocket circuit makes him happy.

While there are more mini-games in Yakuza Zero, perhaps the most popular ones are the character-specific business simulators. Kiryu can challenge the Five Kings of Kamurocho who have encroached on and threatened other business owners (and recruit a chicken to be his manager in the process), and Majima can run a cabaret club in Osaka in which he recruits women in the city to shut down the insidious Five Stars of Sotenbori. Each mini-game alone can take dozens of hours to finish depending on a gamer’s predilections as was my case when I slowly began to realize that perhaps I secretly wanted to be a cabaret manager. As an added bonus, these mini-games have some of the most comical and absurd side quests in the game.

Yakuza Zero is a game that melds many genres together. However, what’s impressive is just how competent these conventions are within the game. Generic conventions can sometimes be designed with good intentions, but their execution leaves something to be desired. For example, the driving elements in Deadly Premonition were intriguing considering the open world environment in the game, but the control and physics were so clunky that I became impatient with cruising around town. Additionally, while it was initially fun to see a sport like tennis in Grand Theft Auto 5, the responsiveness was lacking compared to games like Top Spin and Virtua Tennis, making it a one and done experience for me. Yet Yakuza didn’t falter in my eyes. Granted that much of this is because the generic conventions are isolated to one feature or in-game experience rather than serving as the foundation for the entire game, but each contributed to a sense of immersion in this rich digital world. I am currently playing Yakuza Kiwami 2 and, thus far, this series has sparked nothing but joy (okay, so some events are really sad). I may be late to the Yakuza party, but I can admit that the series quickly became one of my favorites during a time when I was starting to get a little burned out with games. Way to go, Sega.