It's certainly a genre-melder, but some mechanics prevent it from being fun for long stretches.

This year’s already off to a complicated start, isn’t it? I’ve always been skeptical about resolutions, but one of mine in 2020 is to make a dent in my game library. On top of everything else I must do this year, it’s a tall order, but posting right as the year begins is a good start. This next game is steeped in nostalgia, specifically 80’s-90’s nostalgia. I experienced the tail end of the 80’s, so most of my memories are nostalgic bits that resemble vaporwave album covers more than lucid memoirs. Still, I do remember the music, movies, shows, toys, and certain games of the era. In fact, we received the original NES as a Christmas present in 1988, so some of my 80’s experiences would pave the way for my future career. The 90’s were a bit more memorable as I experienced the entire decade as a young boy and mid-teen. I might have been (too) young and biased, but the 90’s were probably the best decade to grow up in as a kid. The developers over at Lazy Bear Games might agree with me because they released a genre-melder called Punch Club in 2016 that pays so much homage to my formative years that it sometimes becomes a distraction.

I can’t remember exactly when I purchased Punch Club in 2019, but it was after my dissertation defense. I bought it for my PS4 after watching the trailer (the price tag didn’t hurt). Some “80’s-inspired” indie games turn me off with their purposeful 8-bit/16-bit graphics. Punch Club didn’t because I could tell it was trying to play with generic conventions in intriguing ways. At face value, it’s a boxing/fighting management game where the gamer trains their avatar to become the best MMA fighter the world (in this case a medium-sized city) has ever seen. Of course, the game hardly ever takes itself seriously as there are nods to just about every 80’s and 90’s action movie trope. Father killed by assassins? Looks like you must avenge him. Need a mentor? Find Rocky’s trainer in his office. Need a best friend like Ray Jackson from Bloodsport? Don’t worry. ROY Jackson will train with you after you fix his truck. Tired of fighting in the legit federation and need a good underground street fight? The list goes on and on…and on…and on. Some of these parodies are quite funny, but others show that the developers went to the nostalgia well one too many times. 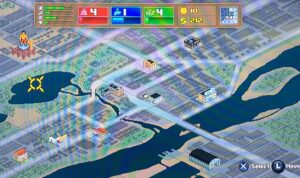 The world map gets larger as you play the game.

Although Punch Club is a management game, it makes some subtle nods to the role-playing and dating sim/visual novel genres that I love to play. This being the case, Punch Club serves as an interesting case study for my blog because it is undoubtedly one of those games I am searching for. It plays with generic conventions, makes a unique experience, and is fun to play. Until it isn’t. Although I downloaded the game onto my PS4, Punch Club seems to have a solid following on Steam. Not only is the aggregate score “Very Positive,” there are 8,400+ reviews for the game. This is an impressive feat for any game, let alone an indie one. Unfortunately, after a while, I realized that the game wasn’t for me and I had to turn it off.

Three issues impacted my playthrough. Unlike most games, you don’t technically get to keep your stats (Strength, Agility, Speed) in Punch Club because they will decrease with each passing day. Eventually, once enough ability coins are acquired, there is a method to lock in each stat at 4, which at least allows the gamer to experience other aspects of the game. On one hand, skill decreases might be considered a great challenge for some, but on the other hand, they led directly into what I considered the game’s second problem. In my playthrough, the gameplay became incredibly tedious as nearly every action in the game (including the role-playing and dating sim elements) was linked to the fight management system. You can train your stats…to fight. You can meet new people…to fight. You can eat…to fight. You can work to make money…to train to fight later. Eventually, my entire playthrough centered on these fights, and I found myself repeating the same actions ad nauseum. 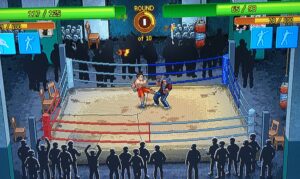 My critiques wouldn’t matter if the fighting mechanics in the management mode were passable. Unfortunately, my third problem with the game is that the battle mechanics are heavily randomized to the point that there often isn’t a strategy in place despite stats and attributes acquired throughout the game (don’t even get me started on the muggers in the game who come after you if you have too much money). I beat one opponent only to fight them again with an identical build, yet I somehow lost the second encounter. Comparatively, a management system like “Success Mode” in MLB Power Pros operates like Punch Club in that most social events in the game will link to stats in mandatory baseball games. However, where both games differ is by giving the gamer control of their avatar during these baseball sequences, thus at least giving some modicum of control to the gamer. This doesn’t exist in Punch Club, and it reached the point where I just wasn’t having any fun. This doesn’t mean that Punch Club is a bad game. However, I became very frustrated and just didn’t enjoy it that much despite my expectations and its initial charm. Perhaps this is an unfair example, but I vastly preferred the fighter creator mini-game in Yakuza 4 as it felt like an actual fighting game experience despite offering similar levels of randomization as Punch Club. However, Yakuza 4 provided them with enough customization to develop a fighter so that they could become a powerhouse without relying too heavily on luck-of-the-draw movements that define every fight in Punch Club.

In fairness, Punch Club checks several boxes thanks to its integration of nostalgia and generic tropes. It’s also worth checking out for the price alone as it won’t break the bank no matter the platform. Gamers who might devote more time to it could feel that it offers them everything they could ask for in a management simulator. I also might return to it down the road if I want to see how the story ends as there are multiple endings. However, for those who want to experience a sports management game that does similar things to Punch Club in what I consider stronger methods of role-playing and dating sim integration, check out the MLB Power Pros series.